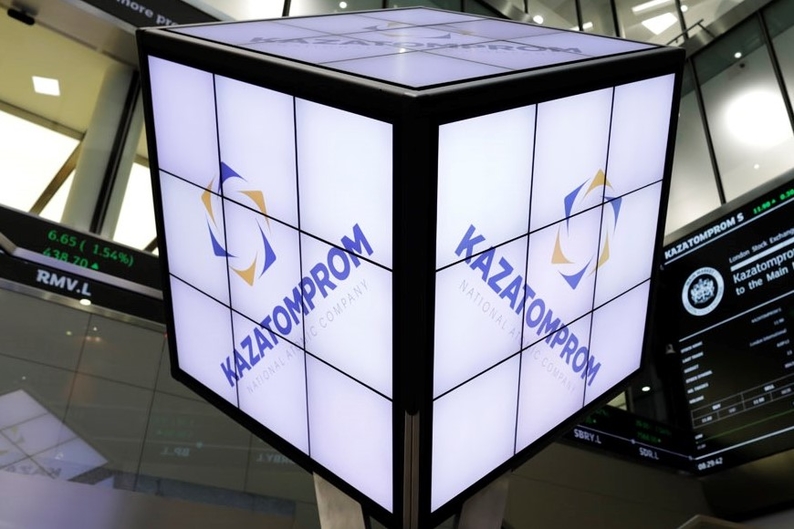 NOT FOR PUBLICATION, DISTRIBUTION OR RELEASE DIRECTLY OR INDIRECTLY, IN WHOLE OR IN PART, IN OR INTO THE UNITED STATES, AUSTRALIA, CANADA, JAPAN OR ANY OTHER JURISDICTION IN WHICH OFFERS OR SALES WOULD BE PROHIBITED BY LAW

The Placing Securities are being offered by way of an accelerated bookbuild through the LSE facilities (the “LSE Placing”) and the AIX facilities pursuant to the rules and regulations of the AIX (the “AIX Placing”, and together with the LSE Placing, the “Placing”), which will be launched immediately following this announcement. The offering is being made to institutional investors outside the US in accordance with Regulation S of the US Securities Act of 1933, as amended (the “US Securities Act”) and to qualified institutional buyers in the US in accordance with Rule 144A of the US Securities Act. In addition, at least 20% of the total number of Placing Securities will be offered to institutional and retail investors on Kazakhstan’s domestic market through the AIX Placing.

The final number of the Placing Securities to be placed and the placing price will be agreed by Samruk-Kazyna and the Global Coordinator and Bookrunners following completion of the bookbuild process, and the results of the Placing will be announced as soon as practicable thereafter. The timings for the close of the bookbuild process, pricing and allocations are at the absolute discretion of Samruk-Kazyna and the Global Coordinator and Bookrunners.

The Placing is a part of the Complex Privatisation Plan for 2016-2020, as approved by the Government of the Republic of Kazakhstan, under which the Company was identified as a portfolio company of Samruk-Kazyna to be partially privitased. It was further resolved by the Government of the Republic of Kazakhstan to dispose of up to 25% of the share capital of the Company. Following this, Samruk-Kazyna offered and sold Shares and GDRs representing in aggregate 15% of the Company’s share capital in an initial public offering in November 2018, pursuant to which its GDRs were admitted to the Official List of the UK Financial Conduct Authority and to trading on both the LSE and the AIX. Samruk-Kazyna now intends to sell additional GDRs pursuant to the Placing.

The Placing will be conducted by way of an accelerated bookbuild offering in accordance with market practice for a transaction of this nature during a period when there is no live on exchange trading in the Company’s securities. This Placing will be launched immediately following this announcement (after close of trading on the LSE) and may close at any time on short notice.

As the Company’s securities are traded on both the LSE, and AIX and Kazakhstan Stock Exchange (the “KASE”) and the Placing includes the AIX Placing and the LSE Placing, given the difference in trading hours between the LSE and the AIX and the time difference between London and Nur-Sultan, to avoid any price manipulation and ensure there is no live trading in the Company’s securities during bookbuilding (i) trading in the Shares and GDRs on the AIX and on the KASE will be suspended on 26 September until trading in the GDRs has resumed on the LSE at 8.00 a.m. London time / 1.00 p.m. Nur-Sultan time) and (ii) the AIX Placing will be open on 26 September between 9.00 a.m. and 11.00 a.m. Nur-Sultan time. Any subscription or purchase of GDRs on the AIX should be made solely on the basis of information contained in the AIX Market Notice published by the AIX in connection with the AIX Placing.

The results of the Placing will be announced as soon as practicable after the close of the bookbuild process. The above timing is indicative only and the timing for the close of the bookbuilding process, pricing and allocations are at the absolute discretion of Samruk-Kazyna and the Global Coordinator and the Bookrunners. The Company will not receive any proceeds from the Placing.

Members of the general public are not eligible to take part in the Placing. This announcement and any offer of the Placing Securities to which it relates are only addressed to and directed at (1) in any member state of the European Economic Area (each, a “Member State”), persons who are “qualified investors” within the meaning of article 2(e) of Regulation (EU) 2017/1129 (as amended, to the extent implemented in the relevant Member State) and any relevant implementing measures (the “Prospectus Regulation”); and (2) in the United Kingdom, persons who (i) have professional experience in matters relating to investments who fall within article 19(5) of the Financial Services and Markets Act 2000 (Financial Promotion) Order 2005 (as amended) (the “Order”); (ii) fall within Article 49(2)(a) to (d) of the Order; or (iii) are persons to whom an offer of the Placing Securities may otherwise lawfully be made (all such persons referred to in (1) and (2) together being referred to as “relevant persons”). The information regarding the Placing set out in this announcement must not be acted on or relied on by persons who are not relevant persons. Any investment or investment activity to which this announcement relates is available only to relevant persons and will be engaged in only with relevant persons.

This announcement does not, and shall not, in any circumstances constitute a public offering, nor an offer to sell or to subscribe for, nor a solicitation to offer to purchase or to subscribe for securities in any jurisdiction. The distribution of this announcement and the offering or sale of the Placing Securities in certain jurisdictions may be restricted by law. No action has been taken by Samruk-Kazyna (or any affiliates thereof) or the Global Coordinator and Bookrunners or any of their respective affiliates that would, or which is intended to, permit a public offer of the Placing Securities in any jurisdiction or possession or distribution of this announcement or any other offering or publicity material relating to the Placing Securities in any jurisdiction where action for that purpose is required. Persons into whose possession this announcement comes are required by Samruk-Kazyna, the Global Coordinator and Bookrunners to inform themselves about and to observe any applicable restrictions.

This announcement and the information contained herein is for information purposes only and does not constitute or form part of any offer of, or the solicitation of an offer to acquire or dispose of securities in the United States, Canada, Australia or Japan or in any other jurisdiction in which such an offer or solicitation is unlawful.

The Placing Securities have not been approved or disapproved by the US Securities and Exchange Commission, any state securities commission or other regulatory authority in the United States, nor have any of the foregoing authorities passed upon or endorsed the merits of the Placing or the accuracy or adequacy of this announcement. Any representation to the contrary is a criminal offence in the United States.

No prospectus or offering document has been or will be prepared in connection with the Placing. Any investment decision to buy the Placing Securities must be made solely on the basis of publicly available information. Such information is not the responsibility of and has not been independently verified by Samruk-Kazyna (or any affiliate thereof) or the Global Coordinator and Bookrunners or any of their respective affiliates.

Information contained herein is not an offer, or an invitation to make offers, to sell, purchase, exchange or otherwise transfer securities in Kazakhstan to or for the benefit of any Kazakhstani person or entity, except for those persons or entities that are capable to do so under the legislation of the Republic of Kazakhstan and any other laws applicable to such capacity of such persons or entities. This announcement shall not be construed as an advertisement (i.e. information intended for an unlimited group of persons which is distributed and placed in any form and aimed to create or maintain interest in the Company and its merchandise, trademarks, works, services and/or its securities and promote their sales) in, and for the purpose of the laws of Kazakhstan, unless such advertisement is in full compliance with Kazakhstan laws.

J.P. Morgan Securities plc is authorised by the Prudential Regulation Authority (“PRA”) and regulated in the United Kingdom by the PRA and Financial Conduct Authority. The Global Coordinator and Bookrunners are acting exclusively for Samruk-Kazyna in connection with the Placing and will not be responsible to anyone other than Samruk-Kazyna for providing the protections offered to their respective client, nor for providing advice in relation to the Placing or any transaction, matter or arrangement referred to in this announcement.

Solely for the purposes of the product governance requirements contained within: (a) EU Directive 2014/65/EU on markets in financial instruments, as amended (“MiFID II”); (b) Articles 9 and 10 of Commission Delegated Directive (EU) 2017/593 supplementing MiFID II; and (c) local implementing measures (together, the “MiFID II Product Governance Requirements”), and disclaiming all and any liability, whether arising in tort, contract or otherwise, which any “manufacturer” (for the purposes of the MiFID II Product Governance Requirements) may otherwise have with respect thereto, the Placing Securities have been subject to a product approval process, which has determined that such Placing Securities are: (i) compatible with an end target market of retail investors and investors who meet the criteria of professional clients and eligible counterparties, each as defined in MiFID II; and (ii) eligible for distribution through all distribution channels as are permitted by MiFID II (the “Target Market Assessment”). Notwithstanding the Target Market Assessment, the price of the Placing Securities may decline and investors could lose all or part of their investment; the Placing Securities offer no guaranteed income and no capital protection; and an investment in the Placing Securities is compatible only with investors who do not need a guaranteed income or capital protection, who (either alone or in conjunction with an appropriate financial or other adviser) are capable of evaluating the merits and risks of such an investment and who have sufficient resources to be able to bear any losses that may result therefrom. The Target Market Assessment is without prejudice to the requirements of any contractual, legal or regulatory selling restrictions in relation to the Placing. Furthermore, it is noted that, notwithstanding the Target Market Assessment, J.P. Morgan Securities plc and Renaissance Capital will only procure investors who meet the criteria of professional clients and eligible counterparties.

For the avoidance of doubt, the Target Market Assessment does not constitute: (a) an assessment of suitability or appropriateness for the purposes of MiFID II; or (b) a recommendation to any investor or group of investors to invest in, or purchase, or take any other action whatsoever with respect to the Placing Securities. This announcement shall not form the basis of or constitute any offer or invitation to sell or issue, or any solicitation of any offer to purchase or subscribe for any securities in the Placing or any other securities nor shall it (or any part of it) or the fact of its distribution, form the basis of, or be relied on in connection with, any contract therefor.

Persons considering making investments should consult an authorised person specialising in advising on such investments. This announcement does not constitute a recommendation concerning a possible offer. The value of GDRs can decrease as well as increase. Potential investors should consult a professional advisor as to the suitability of a possible offer for the person concerned.