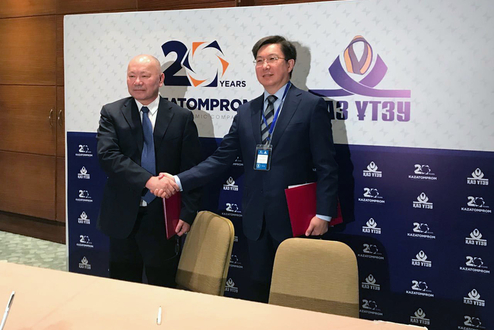 The agreement about creation of The International Scientific and Educational Center of the Nuclear Industry between NAC Kazatomprom JSC and NJSC KazNRTU named after K.I. Satpayev was signed on April 21, 2017 in Almaty. The document was signed by Baurzhan Ibraev, Chief Director on production and NFC of the National Nuclear Company, and Iskander Beisembetov, Rector of the National Research Technical University. The task of the Center is training of highly qualified specialists for the nuclear industry in Kazakhstan, including the training of foreign students. The educational institution will improve the methods and technologies of training in the directions necessary for Kazatomprom, as well as conducting research and development work on topical issues of atomic science and production. Under the terms of the Agreement, Master students of KazNRTU will be able to practice in Kazatomprom's departments. In addition, the company will help students and university employees to introduce successful results of scientific research, course and diploma projects into production. The Association of Honorary Professors "Aksakaldar Kenesi" (Council of Veterans) from among the employees and veterans of the National Atomic Company was formed in the order to teach the disciplines at the Center. Geology and exploration of uranium fields, metallurgy of rare and rare-earth metals, automation of production processes are the main disciplines in the training program. In addition, a significant part of the disciplines will be taught in English. In his Message to the People of Kazakhstan, the Head of State focused his attention on the main priorities designed to ensure the growth of the country's economy. The key aspects are technological modernization of the economy and improvement of human capital, including the use of digital technologies, the development of the mining and metallurgical complex, and changes in education system. And, of course, in order to maintain Kazatomprom's leading position, first of all, competitive personnel are needed. Therefore, the number of teachers will also include veterans of the nuclear industry, who have rich experience and valuable knowledge. "Aksakaldar kenesi" will become a school of continuity of Kazatomprom's unique experience, - said Baurzhan Ibraev, Chief Director on production and NFC of NAC Kazatomprom JSC. “The International Scientific and Educational Center of the Nuclear Industry is unique platform for training of high quality specialists. The joint actions of professional personnel of science and production will give synergetic effect in further development of nuclear industry" – said Iskander Beisembetov, Rector of the National Research Technical University