Head of State held a meeting with NAC Kazatomprom JSC Chairman of the Board Mr. Galymzhan Pirmatov 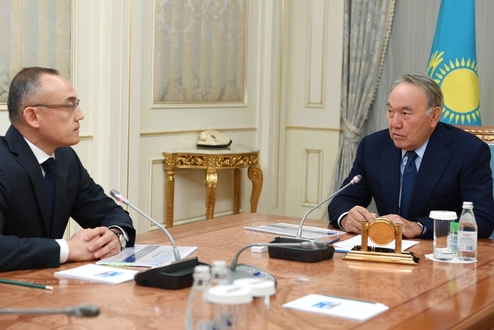 The head of state underlined that Kazatomprom is one of the largest state-owned companies in Kazakhstan and holds leading positions in the world nuclear industry.

NAC Kazatomprom JSC Chairman of the Board reported main results and prospects of the company's activities to Mr. Nursultan Nazarbayev.

- We carefully analyzed current situation in the world nuclear industry and adopted new development strategy. For the year 2017 and 8 months of this year, Company fulfilled all production and financial plans. The payment of dividends are expected to increase more than two times this year in comparison with the results of the last year, said Mr. Pirmatov.

According to the head of Kazatomprom, in the current year the sales volumes of uranium will exceed the average figures of the last three years. Thus, the company will become the largest player in the world market, not only in terms of production volumes, but also sales.

At the end of the meeting, President of Kazakhstan gave a number of specific instructions.